WEDDING OFFICIANT OF COLORADO
COURTSHIP STORY
In all my ceremonies - with permission of the bride and groom - I share a bit of the couple's courtship story, personalizing their wedding. Below is an example of how a portion of a courtship story is shared. 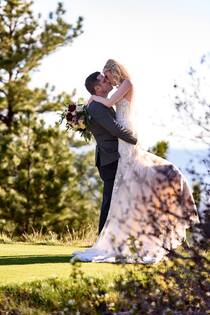 John and Jessica met on a blind date.  When John knocked on Jessica’s door that evening, and she opened it and they saw each other for the first time, they felt nervous, excited, and optimistic. And the “just friends” stage of their relationship lasted about two minutes!  They knew instantly that they were in for something more than that. The stars aligned and  their hearts opened to one another. Their first date was ideal: dinner and a concert. The conversation was effortless.  Their second date included Sushi, they closed two bars, walked the 16th Street mall, and talked for hours. And the evening ended with their first kiss. John and Jessica began growing into love from the beginning. After two years of courtship, John made an elaborate plan to propose to Jessica.  He would take her to Breckenridge, ride the gondola up, and propose on top of the mountain - on top of the world.  So they traveled there only to find that there was no snow and the gondola was shut down! Not to be deterred, John took her to a deli restaurant instead!  After lunch, they strolled along a stream, walked out on some rocks in the water.  Jessica noticed that John was shaking, and understood why when he suddenly dropped to one knee! Out there, in the middle of the river, he asked her to marry him and she said yes.  But John did not take the ring out of his pocket until they were back on the river’s bank!
Back to Top
Rev. Scott Awbrey  ~  Colorado Wedding Officiant  ~  scott@revscottawbrey.com